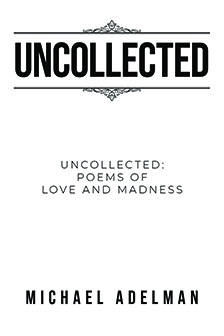 The book is composed of a series of poems written primarily over the last ten years. They deal with love, death, mental illness, human weakness, human strength, art, and how the poet perceives his life, the world, and the lives of others. The poems are rich in their imagery. Their tone is often tense and edgy. Adelman’s poems not only explore the dark heart of “love and madness” but the humor that can be found in that dark heart. His poems cry out to be read again and again. One can see the influence of such giants as D.H Lawrence, William Butler Yeats and Isaac Bashevis Singer. He has written a book that haunts and teases the reader, a book the reader will not soon forget.