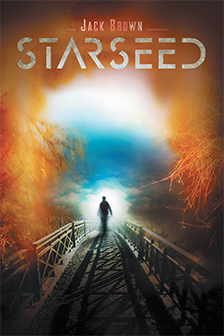 As a child, Jamarcus Bridge has always been interested in with space. Not just as entertainment, or for science, which he also loves, but because it felt like his home was in the stars. He even had dreams of aliens that he would visit on different worlds growing up. But he never told anyone for fear that he would be told he had a mental illness. Also, being a black male growing up, to be interested in science or to act smart was to act white. It was this inner conflict that began Jamarcus life long depression. After growing up and forgetting his childhood dreams, he joins the Army and serves during the first push into Bagdad during the Second Iraq War. Jamarcus witness horrific acts, some his own, that scars him to his core. But he is lucky enough to meet a woman whose love for him eases his pain. But the toil of war and the lost of his girlfriend shatters Jamarcus consciousness, realizing that he has nothing to live for. It is at this point that the aliens from his childhood dreams come back into his life and informs Jamarcus who he really is. That he himself is a higher dimensional being sent down to a lower plane to learn the hard lessons of life. That we are the sum of our actions and the consequences of them. With their help, Jamarcus begins his