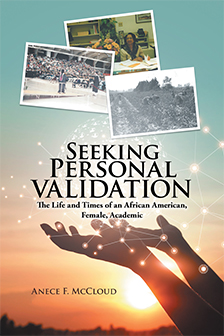 rural south during the late 1930s and 1940s. Being poor and having to confront three

types of prejudices-racial, colorism, which is light versus dark complexions within

the Negro race, and poverty-affected her self esteem and feelings of self-worth.

theirs was straight or loose curls. She dreamed of being a different person and in

at least one instance, she tried to change her personal appearance in a non-sensible

manner that could have been dangerous. ere were also family problems while

she was growing up that added to her misery. She felt that she did not belong and

was not comfortable in any group in society; that there was nothing of value in her

to contribute to her life or to any one else’s. However, she worked hard in school

hoping to make her family proud. Consequently, she was elected editor of the high

school weekly newspaper and editor of the senior class yearbook. She finished high

school and college with good grades and married a U.S. Air Force Officer on the

evening of their commencement day. In her early twenties, just as her self esteem

was improving, an uncontrollable illness made her feel that she was living between

heaven and hell. is sometimes put a strain on her marriage. However, she and her

husband loved each other dearly and were blessed with two lovely daughters. She

never lost her interest in writing. In the mid sixties she took the Famous Writers’

Course and received good critiques. Although she selected Sociology for her Master’s Degree, she continued to enhance her writing skills by trying to write impressively when doing business letters, grant applications, reports and other documents. Several professional, academic positions gave her many opportunities to write and helped her reach goals that, as a child, she never dreamed she would be selected for or could accomplish. And in these new positions, helping others gave her fulfillment and insights into what really matters in life…. rough her writings, the reader becomes more knowledgeable about life as a black person and can learn unknown facts about race relations, working in positions that are not well- known by the general public; experiences with sexism, and combating everyday problems.