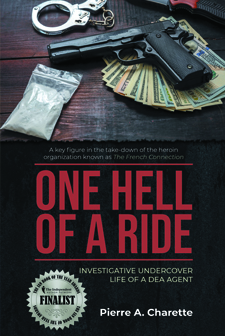 One Hell of a Ride

This is the life story of Pierre “Pete” Charette, a French Canadian, who became a key figure in the War on Drugs in the United States and Europe. His adventures span a heart-pounding, 33-year career as a police officer starting out in Broward County, Florida, an undercover detective, a federal agent, and DEA special agent in the United States and Europe. It includes some of the most famous cases ever developed by this agent, his colleagues, and the DEA. His investigative ability and imagination took him into the French criminal underworld, behind the Iron Curtain and all across the planet to untangle and uncover some of the largest criminal and drug cases ever unraveled by a state or local police officer and DEA special agent. Charette’s storied life is filled with cunning, intrigue, and white-knuckle courage, risking his life on numerous occasions to effect the arrest of the criminals in some of the major international drug trafficking rings. Throughout his career, Special Agent Charette received numerous awards for his accomplishments, including the development of new and innovative techniques for undercover work and investigations in narcotic enforcement. The book contains “mature” situations.