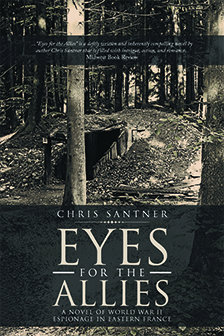 Eyes for the Allies: A Novel of World War II Espionage in Eastern France

Set in the rural French farmland and forest west of Verdun, this World War II story is filled with intrigue, action, and romance. Alphonse DeBoy and his three grandchildren-Aurélie, Josette, and Luc-have been supplying food to their American visitor, Maj. Mark Dornier, for close to a year from their farm just outside Les Petites Islettes west of Verdun. Dornier parachuted into the Forêt Domaniale de Lachalade in October 1943, and he’s been living at a World War I French artillery camp. He’s waiting for a second British officer, Lt. Alex Ryder, to join him. Ryder is in love with a secretary, Polly Berson, who is really a captain in the SOE. She also happens to be the cousin of Aurélie, Josette and Luc. To complicate things further, Josette and Aurélie develop feelings for Dornier. As Dornier gathers information on German defensive positions, the Nazis have developed several weapons to slow down the Allies when they invade, leaving it to the SOE and its operatives to gather intelligence on the weapons. Now, after almost a year of observing the German defenses, Gen. George S. Patton’s Third Army approaches the area needing all the information it can get to circumvent the Nazi special weapons. The unexpected events of war challenge them all.