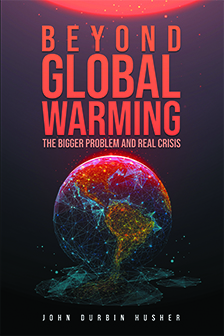 Beyond Global Warming: The Bigger Problem and Real Crisis

Affecting millions of people worldwide, global warming is one of today’s most timely and vital topics. It’s an issue that’s been studied, written about, and debated by scientists and lay people alike. But in Beyond Global Warming, engineer John Durbin Husher argues that we have an even bigger problem on our hands’ and shows us what we need to do about it. In Beyond Global Warming, Husher looks at the origins and causes of global warming and delivers compelling answers to the following questions:

– What is the earth’s history relating to climate changes? What caused those changes?

– Is the population increase responsible for the global warming?

– Did the addition of oil and fossil fuels to the environment contribute to global warming?

Husher suggests that the earth has been consistent and resilient to the many weather events it has experienced since its inception. He maintains that global warming is not related to an overall increase of carbon dioxide in the air, but that it is indicative of a far more pressing energy issue. Beyond Global Warming offers eight creative and powerful solutions for the crisis behind global warming so that, together, we can ease the situation for future generations.